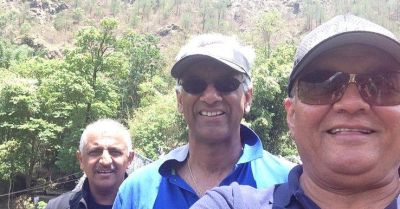 Kirit Patel and three colleagues from the pharmaceutical industry have completed an astounding 4,758-mile charity road trip from the UK to India, a country the Day Lewis chief executive described as "the craziest I have ever driven in the world."
Patel and his fellow intrepid travellers, Peter Cattee, CEO at PCT Healthcare, Manvir Patel, managing director of Manichem and Hiten Patel, managing director of PharmaPlus, arrived in Ahmedabad, the largest city and former capital of the Indian state of Gujarat, marking the end of a journey which spanned 12,000 miles and over 17 countries.
The Day Lewis chief has been recording his journey on Facebook and in his latest entry, dated June 10-11, he said: "This morning, we had a tour of the city of Lucknow. We visited the palace called Baba Imam Bara, built by a Nawab who was the ruler at the time.
"The place was like a maze as there were many secret passages built in the 17th century. It was very difficult to take it all in; the temperature was a scorching 50°C.
"Afterwards, we went shopping. I had given most of my clothes away as they were too warm for this climate. It was time for a change of wardrobe, and Indian cotton shirts were the best for keeping cool.
"My legs, which have not seen much sunlight in all these years, were certainly beginning to get a decent tan. In the afternoon we once again set off on our journey. Nalini (Kirit's wife) used her local contacts to book us a hotel in a resort town called Orcha. The traffic was heavy and we arrived there too late in the evening to see anything.
"The heat had exhausted us and we hit the sack early. In the morning, we explored this remote but beautiful resort. However, no one dared get out of the car with the temperature in excess of 50 degrees centigrade!
"Today, we had decided to cover the maximum distance and head for the beautiful city of Udaipur. This was to be our last stop before reaching our final destination, the city of Ahmedabad."
The trip was not without incident, as Kirit reveals in his blog. Hiten Patel, he says, hit a stray cow while driving and was, according to Kirit, "visibly shaken."
"Unfortunately, there was an accident. Hiten was at the wheel and we were on the national highway, which is equivalent to our motorways, when a cow stepped on to the road straight into our path! The poor cow caught the full impact of the bull bars on our land cruiser," he wrote.
"We stopped immediately and I could see Hiten was visibly shaken. He went over to check the cow, but sadly, the poor cow must have died immediately on impact.
"We made enquiries from people who gathered around us, as to who the owner was. It turned out it was probably a stray as no one claimed ownership."
Soon Kirit took over at the wheel and, as he revealed on Facebook, almost collided with someone riding a motor bike."To give Hiten a break, I took the next driving shift. Within five miles after I started driving, a motor bike steered into my path and I narrowly avoided hitting him!
"I was immediately asked by all four passengers to hoot at all motorbikes and lorries, to warn them when I was about to overtake. "Yesterday, I had driven the whole journey without hooting a single time! I just wanted to prove that it can be done. In such a heat wave it's difficult to stay focused for so long, so Manvir took over the last stint, and brought us safely to Udaipur."
Kirit told Pharmacy Business that India was "the craziest country I have ever driven in the world" and insisted he could have "killed a dozen people" on his first night driving in the country.
He said: "On the day I crossed over from Nepal, Rupa my daughter sent me an article on  the dangers associated with driving in India and wished me good luck. Even this warning didn't prepare me for what I was about to experience.
"I could have killed a dozen people on my first night driving when we crossed into India from Nepal late in the day as no-one seem to be wearing any reflective gear or have reflectors on any bikes or rickshaws.
"The life in India I have come to a conclusion must be cheap. Lorries don't have rear lights, the bicycles, hand carts and motor bikers don't seem to care if they drive on the wrong side of the dual carriageway.
"There is no such thing as indicators. No doubt you would probably lose your hand if you were to use it to indicate. Someone once told me that on their first visit to India he decided that there must be a god. How else can anything move in India! I have come to the same conclusion."
The trip saw the four men pass through Europe and cities such as Berlin, Dresden, Prague and Kiev, where they got a first-hand taste of the devastation of the Ukraine-Russia conflict.
Their journey took them to Poland where they took in a sobering visit to the Auschwitz concentration camp, then Romania, Kazakhstan and China.
A spokesperson speaking on behalf of PharmaPlus paid tribute to the exploits of Hiten Patel. "After the whole day of driving, Hiten used to stay up till late in the night updating the blog each day (sometimes till 2 – 3 am in the morning)," the spokesperson said.
"I am amazed about his dedication to the cause! From the start we promoted the blog and the charity appeal to all PharmaPlus members and also on social media via PharmaPlus Facebook page."
The journey raised money for Pharmacist Support, an independent charity which offers a free and confidential service for pharmacists and their families.