Dutch officials handed over a pair of clogs and the keys to the European Medicines Agency’s temporary base in Amsterdam on Wednesday as the watchdog prepares to leave London after Brexit.

The regulator’s new 300-million-euro headquarters will not be ready until November, so the EMA will be based in stopgap accommodation for several months after Britain quits the EU on March 29.

In what the Dutch government hailed as a “festive moment”, EMA executive director Guido Rasi was given a pair of the traditional Dutch wooden shoes by health minister Bruno Bruins.

“The first important step has been achieved and sealed… and we can start to operate sharply on the 29th of March,” Rasi told AFP at the handover ceremony.

“So far, (the move went) smoothly, so far, everything is working. It’s painful, it’s hard, there is a lot of additional work… but it’s going smoothly, I’m satisfied. Today is a good one!”

Based since 1995 in London’s bustling Canary Wharf business district, the EMA evaluates and supervises medicines for human and animal use.

But the European Union said the agency and its 900 staff had to move to a member country following Britain’s seismic June 2016 vote to leave the bloc.

Amsterdam beat the Italian city of Milan to win the right to host the EMA in a tense tiebreak vote in November 2017. France grabbed the London-based European Banking Authority.

‘Brexit is not good’

The Dutch video for Amsterdam’s victorious EMA candidacy had stressed a continuity with two famed parts of British life, saying that “we also have a very stylish queen, and enjoy fish and chips”.

The Dutch government says that in addition to the economic boost of the staff and their families moving to the country, it also expects the agency to attract some 36,000 business visitors a year.

But the failure of the “Venice of the North” to get the agency’s new home ready in time prompted a legal challenge by Italy as well as concerns by officials and lawmakers.

However Rasi brushed aside concerns about the temporary offices: “As long as it works, it’s good.”

“What will be important, is that since we will be, probably, back full force in November, the final building will be ready for that time.”

The Dutch minister promised that they would meet the deadline.

“Today we have reached a milestone: the formal handover of this building,” he said, adding that it was a ” temporary home because as foreseen in our bid to host the agency, a final home will be delivered this November”.

With sweet tax deals and a business-friendly, English-speaking environment, the Netherlands has rolled out the “orange carpet” to win companies and agencies leaving Britain after Brexit.

Dutch Prime Minister Mark Rutte however denied that Brexit was a good thing for the Netherlands.

“I don’t want to see this as a business opportunity, because it is not,” he said during a visit by Japanese Prime Minister Shinzo Abe, which largely focused on preventing Britain from crashing out of the EU without a divorce deal.

“Brexit is not good and a hard Brexit could even be worse, and that could never be offset by extra investments from other countries.” 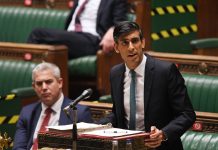