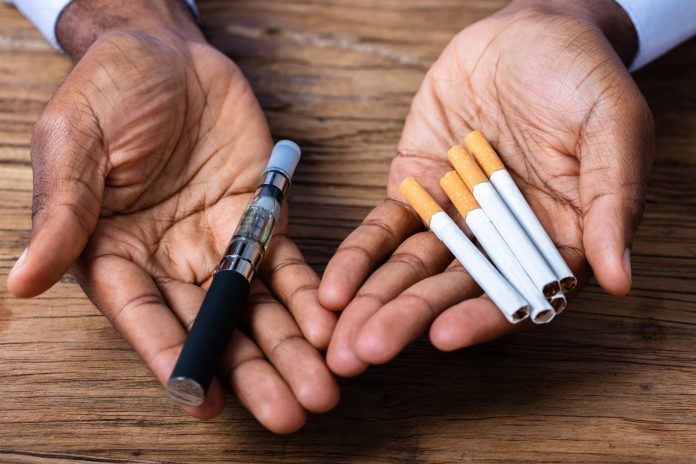 Many pharmacists are already doing excellent work helping people to quit smoking. In fact, in almost one in 10 local authorities, pharmacists or GPs are the only health professionals delivering stop smoking support. However, despite declining smoking rates, smoking remains one of the biggest public health issues.

Last year in England, there were 77,800 deaths from smoking with many more people suffering disease and disability as a result of their tobacco addiction. Efforts to help people quit smoking will need to be redoubled if we are to meet the government’s stretching ambition of a smoke-free country by 2030 (defined as smoking prevalence below five per cent across society).

Achieving this target would make the single most significant contribution to the Ageing Society Grand Challenge: delivering five extra healthy years of life.

It would also substantially narrow the life expectancy gap between the richest and the poorest. And, of course, it would save tens of thousands of lives.

If you’re not already, here’s more that you can do than just refer people to your local Stop Smoking Services if one is available and if one isn’t available, then your role is even more crucial.

Community pharmacists can continue to make real change to the lives of people on their smoking cessation journey, by supporting them in a myriad of ways.

Here are some ideas:

Pharmacists can help to reach the government’s goal by delivering VBA (Very Brief Advice). VBA is a three-step process: establishing and recording smoking status (ask); advising on the most effective way to stop, or simply saying “do you know your chances of successfully stopping are greatly increased if you use evidence-based support?” (advise); and offering help by, for example, referral to a stop smoking service (act).

The intervention is designed to be delivered in as little as 30 seconds. And pharmacists can access training from the National Centre for Smoking Cessation and Training on how to deliver VBA online and for free.

Pharmacists can support people to quit by recommending stop smoking medications, which are proven to increase smokers’ likelihood of quitting successfully.

Pharmacists should discuss the most effective smoking treatments with their patients: either combination NRT, or varenicline, in combination with behavioural support.

E-cigarettes are now the most popular method of quitting smoking in the UK, and clinical trials have shown they are nearly twice as effective as nicotine replacement therapies, such as patches or gum.

During consultations, pharmacists are well placed to suggest the use of e-cigarettes as a quitting tool for smokers who have not yet tried them.

In the US, there has been an acute outbreak of lung injury linked to vaping, but no such outbreak is occurring in the UK. According to the US federal agency, Centers for Disease Control and Prevention, Vitamin E acetate is a strong contender for the cause of this vaping related lung damage.

However, in the UK, The Tobacco and Related Product Regulations 2016 banned all vitamins from vapes.

Furthermore, e-cigarettes on sale in the UK are regulated by the medicines regulator, the Medicines and Healthcare products Regulatory Agency (MHRA).

ASH and Public Health England’s advice remains the same: smokers should consider switching to vaping as a means to stop smoking. Vaping is substantially less harmful than smoking.

The nicotine inhaler Voke was recently licensed as a medicine by the Department of Health and is now available on prescription as well as over-the-counter.

Voke is also licensed for use by pregnant women and so when pharmacists are consulting with expectant mothers, the product can be recommended as a potential quitting aid for those who have not found NRT effective.

Informing people of the NHS Smokefree app is another way pharmacists can support people on their smoking cessation journey.

The app can help people stop smoking by providing daily support and motivation as part of a four-week programme. If people stay smokefree for the duration of the programme, they’re up to five times more likely to quit long-term.

ASH is calling on the Department of Health to impose a polluter pays charge on the tobacco industry.

This proposal would raise £265.5 million for tobacco control in England annually, and it is supported by ASH, Cancer Research UK and over 120 other health-related organisations. It is also supported by 71 per cent of adults in Great Britain.

The funding from the charge would be put towards mass media campaigns to reduce smoking alongside stop smoking services and local authority enforcement against the illicit trade.

Deborah Arnott is chief executive of Action on Smoking and Health