Home awards PHARMACY BUSINESS AWARDS 2019: ‘Pharmacy is up for challenges posed by change’

As the beautiful autumn day waned on the south bank of the River Thames, it was time for some polite conversations, canapes and wine at Park Plaza Westminster Bridge Hotel.

The stage was set for a gala evening to shine a light on the outstanding work done by community pharmacists in helping secure the health needs of their local communities up and down the country.

This year’s Awards – handed out in 17 categories – were awash with accolades for community pharmacy.

The chief guest of the evening, Health Minister Edward Argar, made a hearty appreciation of the profession by singling out pharmacists “who day in and day out go above and beyond the call of duty to provide their community with the best care and best advice that is possible to provide.”

He outlined the government’s position by saying: “The new contractual framework is not just about championing minor ailments in community pharmacy. It is far from that. It is an alignment with other primary care contractual arrangements, particularly for GPs and the new GP network contract. It supports the integration of community pharmacies to a wider local NHS provider system.”

The minister reassured an enthused audience that community pharmacy “has and always will be an integral and trusted part of our wonderful NHS, part of the family without whom our healthcare system simply wouldn’t work.”

He commended the community pharmacy sector which dispenses over a billion prescriptions every year for being “certainly up for the challenge posed by change.” Argar said the sector had “a vital role to play in reducing demand on the health system as a whole, moving care out of hospital and into the community.”

Thanking pharmacists and the pharmacy bodies for supporting the government in its plans for a potential exit from the European Union, he said: “Our arrangements and plans for Brexit continue at pace and I want to take the opportunity to extend my deepest gratitude to all of you for all that you are doing.

“While we’ve been beefing up all arrangements in dealing with shortages, working with suppliers, securing additional freight capacity, changing our regulatory requirements and including and enacting other options to deal with shortages, you’ve been dealing with your patients, face to face, day in day out as you always do, providing all the advice and reassuring them on supplies.”

Appreciating the sector for being “a trusted partner in delivering world-class social health service,” the minister said: “You don’t just give people the medicines they need. You are there as part of their lives, particularly around elderly and vulnerable people when they come in to talk to the pharmacists – it’s like talking to a friend.”

In his welcome speech earlier, Shailesh Solanki, the Executive Editor of Pharmacy Business magazine, gave a flavour of the state of affairs in the country’s politics, explaining how the “polarization of our politics” reflected “the deep divisions in the country.”

But despite succession of challenges facing community pharmacy such as “deep funding cuts and margin clawbacks, rising costs and online competition,” he said the sector had shown “great resilience” just like “our great nation.”

Solanki lauded pharmacists as the public’s most accessible health professionals and said that their contact with the public was invaluable.

“Over 1.8 million people visit a local pharmacy each day. These pharmacies dispense over a billion prescriptions a year.

Community pharmacy is making these contacts count. From flu vaccinations, resolving medicine shortages and preparing for Brexit, the profession has clearly demonstrated its value to the public’s health.”

So, he said, despite many questions over its very future and as community pharmacy stood on the verge of a fundamental shift, it must change to embrace the opportunity that’s become available.

“We now have a real opportunity to be that integral part of primary care which the profession has so passionately advocated.

“We must show we are both capable and willing to play our part in the new primary care structures. We must evolve and quickly adapt to the changing health and retail environment.

“Technology and digital healthcare are transforming our world and pharmacy must be at the forefront of this change.”

Solanki was of the view that since the Government would be seeking further efficiencies in dispensing and other areas to make way for a raft of new clinical services, community pharmacists would need to make “tough business decisions and rational choices” which wouldn’t be easy as it would “disrupt the traditional way of doing things.”

“But amongst all the change we must never lose sight of the huge value of human interaction. Community pharmacy and their teams have very close relationships with their patients and their communities.

“It is that trust which can bring about meaningful change to people’s lives,” he said, making way for Sky News presenter, Sarah-Jane Mee, to host a spectacular awards night, organized by the Asian Media Group – Britain’s biggest Asian publishing house.

Eoghan O’Brien, a pharmacist from County Antrim in Northern Ireland, beat off some tough competition to walk away with the coveted Pharmacy Business of the Year 2019 award. 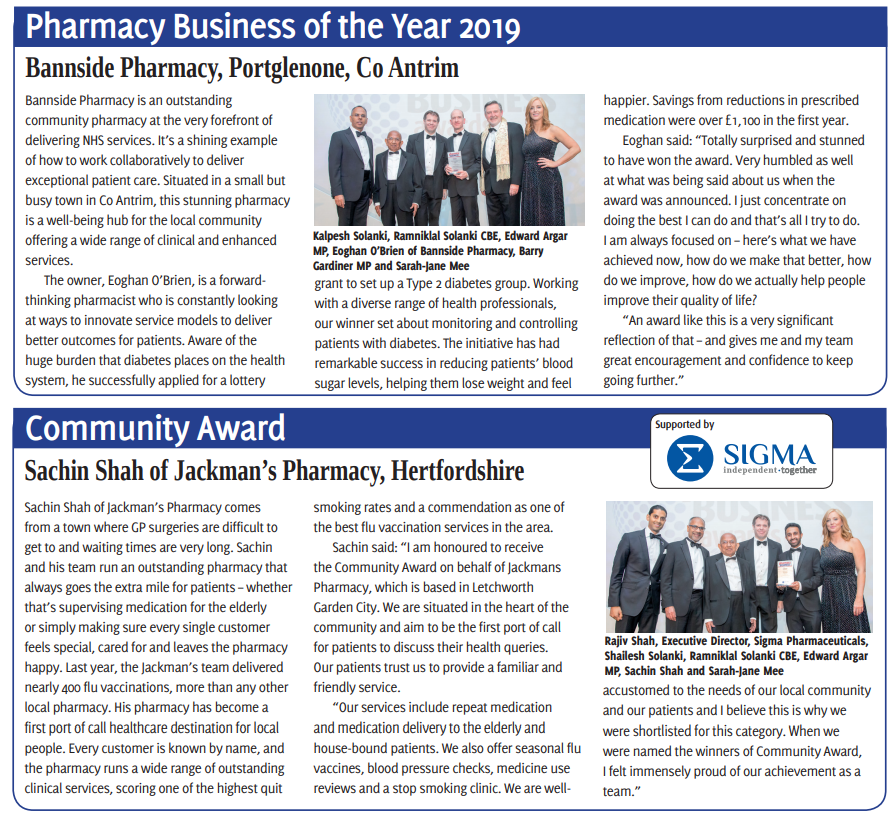 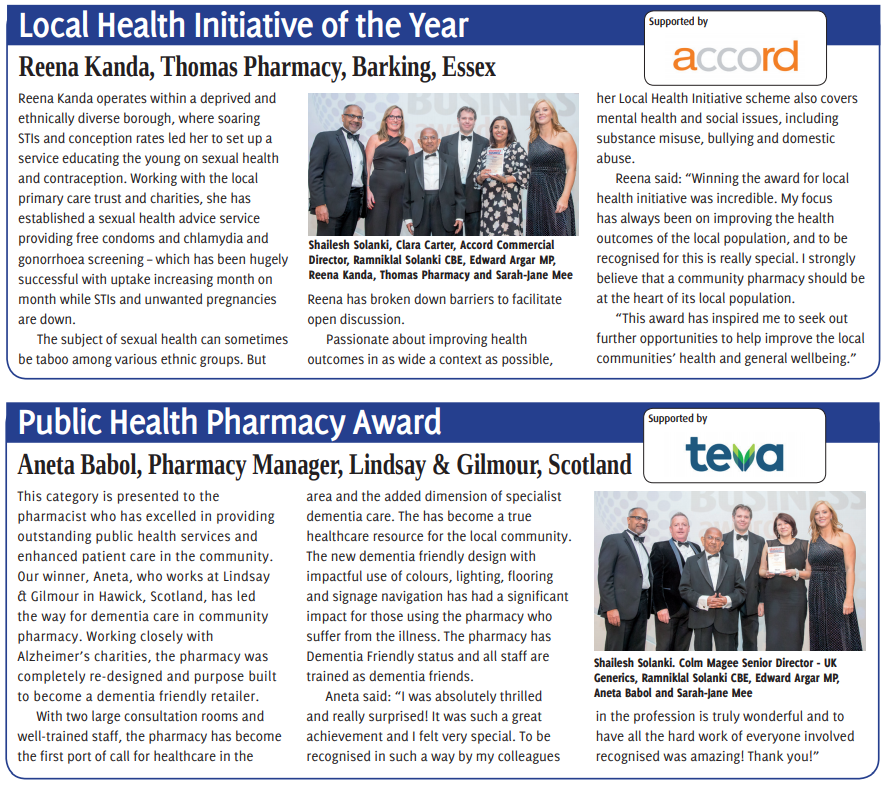 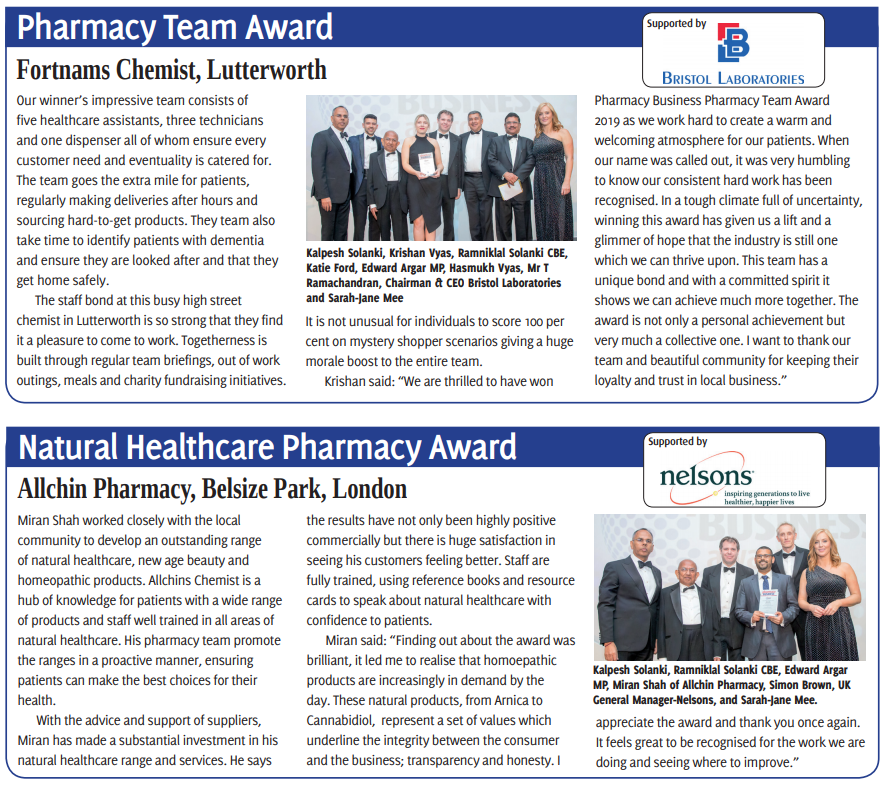 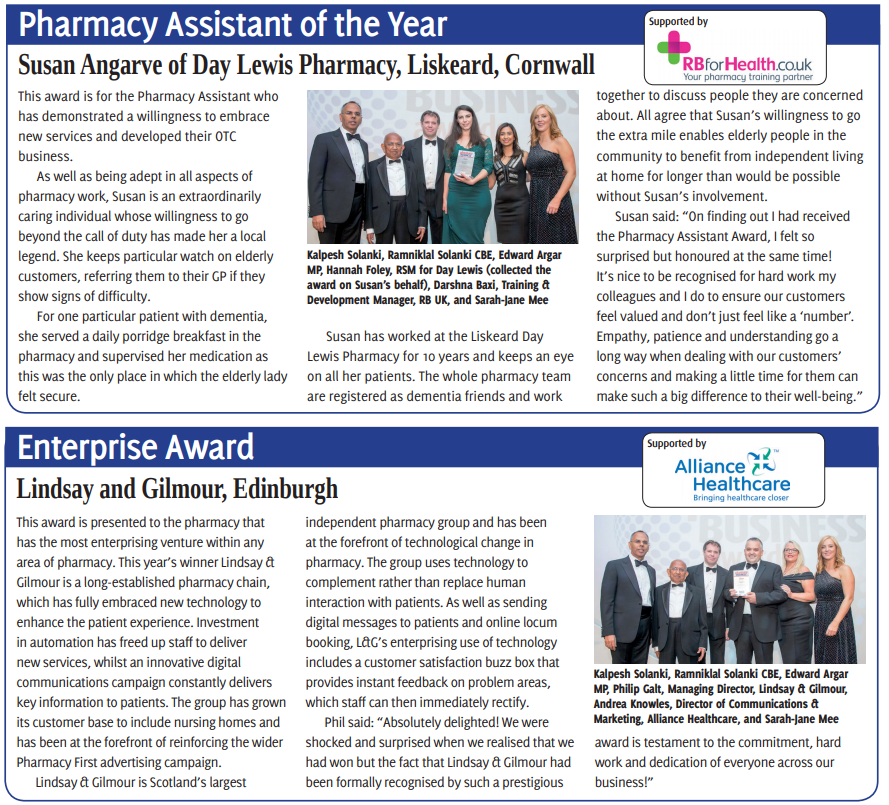 MHRA makes changes to how it issues drug alerts