The quintessential expert and a veteran on pharmacy practice, politics and self-development, Hemant Patel needs no introduction. His ubiquitous influence is obvious!

That he’s maverick and not someone who minces his words are well known but what people sometimes miss out to discern is the fact that he’s also an extremely deep thinker, a philosopher and a futurist in his own right.

“I constantly look for evidence to find out what is happening. I test what I pick up and try and determine the probability of that becoming a reality.”

When the National Health Service (NHS) announced its Long Term Plan in January, there was hardly anything in the document that surprised Hemant.

“It was a predictable consequence of things which the NHS have to manage,” he reflected on his sixty-fifth birthday when I caught up with him at his home in a rather leafy and serene part of Essex, just a few quiet miles away from the hustle of London.

Hemant had seen it coming for years. He knew that pharmacy had been warned through and through on several occasions. He recalled an old Nuffield Trust report which suggested that “pharmacy must change to provide cognitive services.”

The report stated: “The pharmacy profession has a distinctive and indispensable contribution to make to healthcare that is capable of still further development.”

But Hemant clarified that these predictions weren’t made in the Trust’s more recent ‘Now more than ever: why pharmacy needs to act’ (2014) report. In fact, they were made some 33 years ago.

And what is of particular significance in the report is how it highlighted the need for community pharmacy to “co-operate on a systematic basis” with general medical practitioners “to increase the effectiveness and reduce the cost of prescribing. Their cooperation should include regular discussion on appropriate medication, drug interactions, and adverse drug effects.”

The ’86 report was reinforced 28 years later when The Royal Pharmaceutical Society issued its own dire warning ‘Now or Never’. It highlighted that pharmacists would need to offer far more than just medicines. The emphasis was on providing services and not just dispensing, paving the way for an expansion in pharmacy roles, which most likely, made its way into the NHS Long Term plan.

He said: “Very little has happened since”. Consequently, on 15 Dec 2016, the government issued a letter, which was a notice to the whole profession which shook them up by imposing cuts on payments in the order of £170m.

“A frustrated Department of Health and an obstinate Pharmaceutical Services Negotiating Committee (PSNC) have conspired inadvertently to hurt a lot of pharmacists. The pain inflicted was a design to create revolt amongst the grassroots against the unimaginative PSNC of the Sue Sharpe era”.

“The Government’s message was this: the way you work and the work that you do things does not fi t in with what the society needs in the future. Your leaders have not come up with a sustainable and modern vision, so we are taking charge to modernise the service.”

Fast forward to the present day and it doesn’t make a pretty reading to learn that not much has changed. Hemant said: “A lot of it is also because a lot of people are stuck in the 60s model, they are entrenched.

“When the dinosaurs looked across the sky and saw a bit of smoke, they kept on grazing. But then when they felt the heat, they were debilitated and couldn’t run fast enough to get out of the danger. My fear is that a similar thing is going to happen to community pharmacy if they continue to overlook the smoke signal.”

“Which retailer on the high street will dedicate 90% of floor space to earn 10% of revenue? 60s pharmacy layout for a 21st century income?” he asks.

One needs to be nimble enough to adjust to the changing environments, says Hemant.

“It’s the time for teamwork, lone wolves will disappear. A survival of the fittest mode will leave most independents in a bad place. Independents now need to consider how to become inter-dependent with their local pharmacies and reorganise their relationships amongst themselves for mutual benefit. Pharmacy locally will have to create a unified local voice and a common interest will define that.

A multi-level approach could be the order of the day. 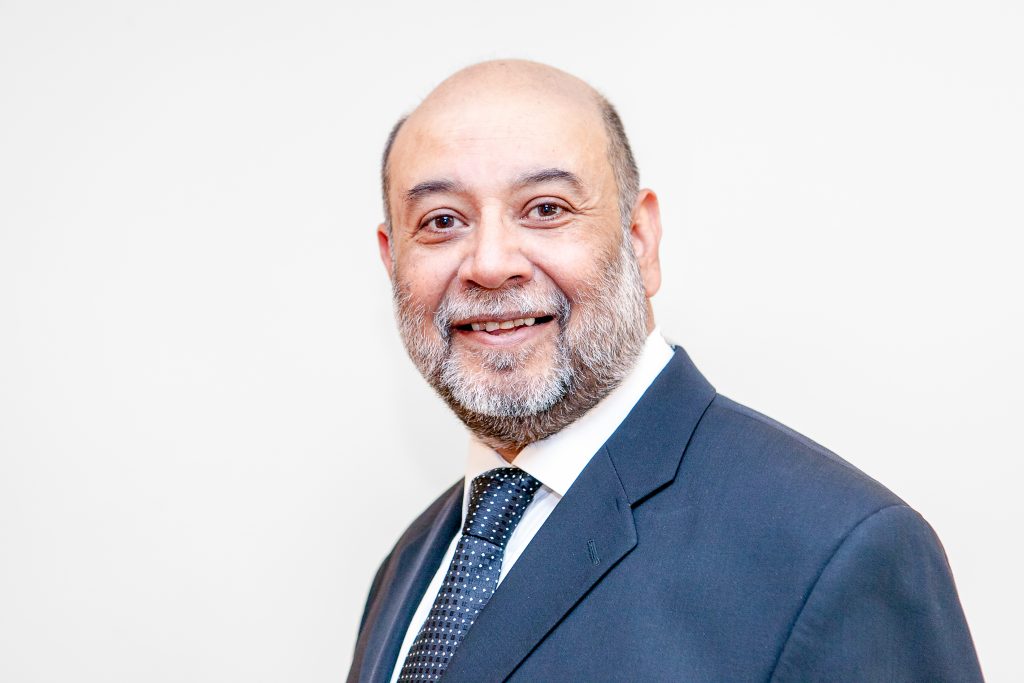 “Firstly, the individual pharmacist must change their mindset to work with fellow pharmacists. The issue if one of trust but trust is something that can be easily lost. A pharmacist needs to be trustable and reach out to people. Then the local system facilitated by the local pharmaceutical committees must create a common understanding of the problems pharmacists face to energise them into sustainable action.”

That’s why Hemant has been advocating a new delivery model called the “high street clinic model” working in a new commissioning structure in order to reinvent the role of community pharmacy in the local communities and to better integrate with the new care models.

The emphasis on providing services, and not just dispensing, paves the way for an expansion in pharmacy roles. Using clinical skills in pharmacy practice have been supported by developments in pharmacy support. Compulsory registration of pharmacy technicians since July 2011 has created opportunities for pharmacists to delegate more tasks to technicians, who will need to have met consistent standards of training.

“I can’t see how such conditions can be managed without community pharmacies. We need to make an economically viable case for it.”

The main objectives of the high street clinic model are to get the best out of:

communities: partnerships with local organisations and charities will increase the sector’s influence.

healthcare system: work with GPs, hospital trusts and mental health facilities to ‘deliver the right care at the right time’.

The high street clinic model will concentrate on knowledge-based services. It takes account of an empowered patient supported by technology to take charge of his or her own health.

“I believe that within five years or perhaps even in two, the number of GP surgery consultations will drop as hand-held devices will make access to GPs easier,” Hemant says.

GP-at-hand is one such service where qualified GPs are available on mobile 24X7 offering all the services that a traditional surgery can, e.g. repeat prescriptions, specialist referrals.

“The kind of things I look at are related to technology – handheld devises, and how powerful super smartphones with 5G connections are going to be in a couple of years. I am interested in how the financial situation is going to impact on everything we do. I am interested in what kind of skillsets will be required and what kind of organisations will develop in order to meet the needs of the communities.

“That helps me to develop a strategic view in terms of where we need to go and that’s where I think I can make the largest contribution to pharmacy.” 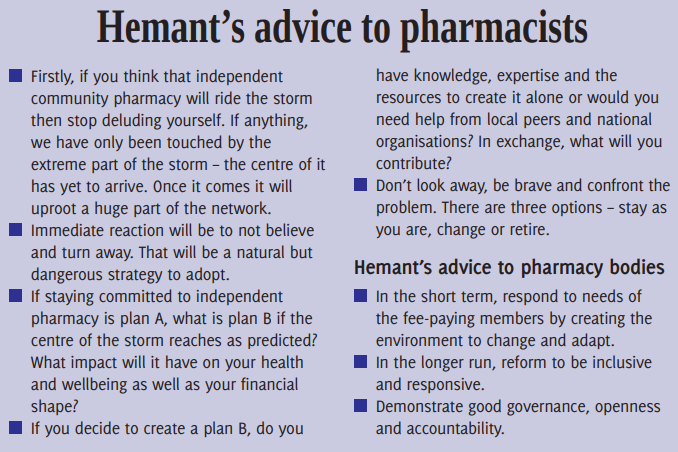 More than a third of over 80s vaccinated against Covid-19