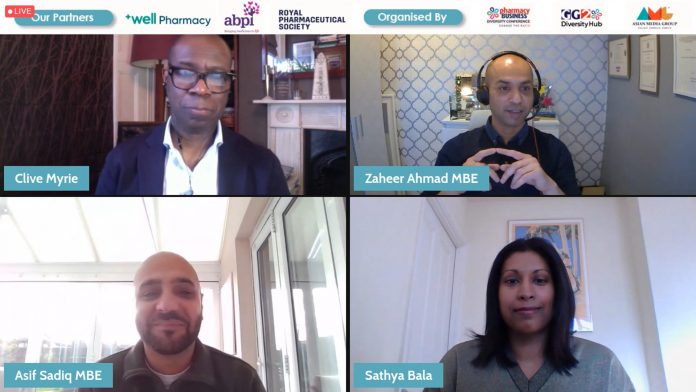 The issues related to race and ethnicity are common across the sectors, but the problem is not unsolvable, said panelists in a discussion on Race, Identity and Belonging In The Workplace, held during the Pharmacy Business Diversity Conference on Thursday (December 9).

The session, moderated by the conference chair BBC presenter Clive Myrie, also had Asif Sadiq MBE, senior vice president at WarnerMedia for Equity and Inclusion, International, and Sathya Bala, founder & CEO of True Change and My Skin My Story, a growing global community for women of color.

Ahmad said encouraging open conversations is important as there is great discomfort and stigma attached to talking about it, and many times senior leaders fall short in their efforts not because they have racist views or they don’t believe in advancing race and ethnicity, but because they are not aware.

“I don’t believe there is a silver bullet that an organization has found that can be sort of replicated elsewhere.

“Everybody is on their own journey. Every organization needs to approach it in a way that is best for its people, its consumer, clients, customers and the communities that it operates in.”

The focus on race and ethnicity needs to continue as “we may have created the change in the last sort of 18 months but we have not yet sustained it to make the impact that we want to see.”

Taking further from allowing open conversation, Bala said that data and stories are two key ingredients that can provide a gateway to reach to the core of the issue.

She said that stories about how racism impacts an individual’s life generate responses from people, they say “Oh, I relate to that. Or it was a little bit different for me”.

People are able to relate to such stories, generating empathy towards the subject, she said.

Emphasizing more on data and stories, she said the idea is to build “a bridge between people while also uncovering the realities of what those barriers and inequities are.”

Highlighting other challenges around race and ethnicity, Sadiq said “stereotypes is one of the big challenges, which we must address and create more education”.

He added that “micro aggressions seem to be quite prevalent, and even when they’re done in a positive way, they exist a lot. And we need to challenge that because one of the things we end up having in any global organization is a dominant culture.

End of the road for free provision of Covid tests?