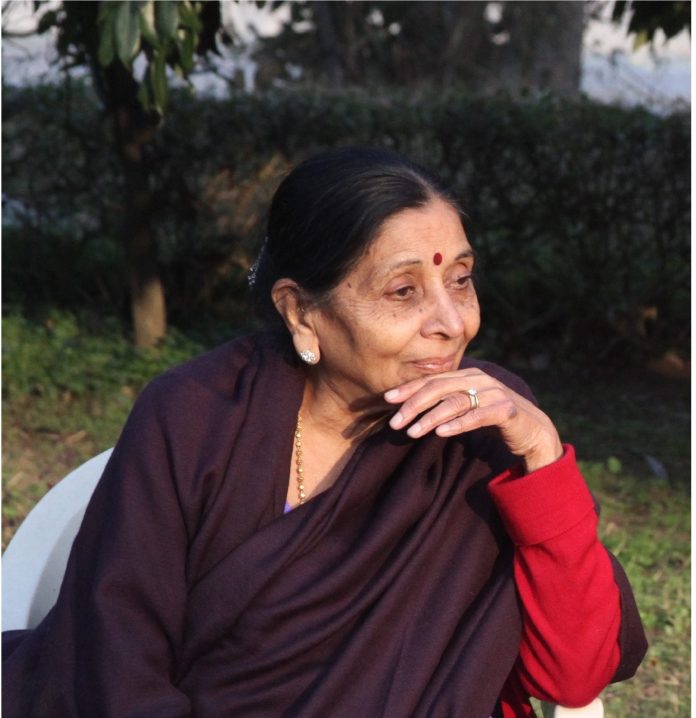 Along with her husband, the late Ramniklal Solanki CBE, Mrs Solanki played a key role in establishing AMG as one of Britain’s largest Asian publishing houses.

They began the business in April 1968, producing the flagship title, Garavi Gujarat, from their terraced house in Wembley, north London.

Today AMG publishes a range of trade and consumer titles, including Pharmacy Business,  Asian Trader, Garavi Gujarat and Eastern Eye, in addition to hosting gala awards dinners. AMG has offices in the UK, US and India, and also publishes titles in the United States.

Senior pharmacists and sector leaders were shocked to hear of Mrs Solanki’s passing, which was on the same day that Queen Elizabeth II died.

In a tribute sent to the Solanki family, veteran pharmacist Hemant Patel expressed his “deepest sympathy and unwavering support”.

He said: “It is often hard to find the right words at a time like this. Your mother was a kind, humble, and inspiring woman. Alongside your father, she (masi, meaning aunt, to us) worked hard and displayed incredible stoicism to establish your family’s publishing business. May you all find peace, comfort, and all the love you need in the days to come.”

Bharat Shah, the owner of Sigma Pharmaceuticals, reached out from a trip in India, to express his “deepest condolence”.

He said: “I was aware of an illness that Parvatiben had but I understood from the family that she was responding well to the treatment. However, she was a ‘fighter’ and very ‘positive’ person. She also had a very loving family and this made her strong.

“In my opinion, the passing away of Ramnikbhai has had a profound influence on not only Parvatiben’s health but the entire Solanki family.

“Now with both founders of the AMG business gone, the second and third generation Solankis have a mammoth task of keeping up the prestige of the business. The family has grown the business tremendously in various directions and I am certain the founders have been assured of a good succession.

“I remember that in 2015, we had both Ramnikbhai and Parvatiben at our Sigma Overseas conference and these memories will be cherished by us. At each Pharmacy Business Awards and many AMG events, my wife Jayoti always had the honour of sitting next to Parvatiben and it was my honour to be often sat next to Ramnikbhai.

“Parvatiben was a role model mum to the entire Solanki family. Jayoti, my family and I will miss Parvatiben at future AMG events. We pray that her soul rests in eternal peace.”

In his tribute, NPA chief executive Mark Lyonette, said: “I’m truly saddened at the passing of Parvatiben, who helped establish the hugely influential Garavai Gujarat publication with her late husband Ramniklal Solanki CBE, over 50 years ago.

“On behalf of the National Pharmacy Association, I want to send our deepest condolences to the Solanki family at this difficult time.

“I am certain the family will carry on her legacy for many years to come and keep alive many happy memories.”

‘Her legend lives on’

Avicenna chairman Salim Jetha said: “I have known Pravatiben for many years. Always smiling, she would make you feel very welcome at each encounter. Behind her quietness, however, I would sense her innovation and role in developing the business and uniting the family.

“A great loss, not just to the family but also to the ethnic community alike. Through her children, her legend lives on.”

In tribute his tribute to Mrs Solanki’s passing, senior pharmacist Ash Soni OBE, who lost his father only a couple of months ago, said: “I express my deepest condolences to the family at this time.

“As a matriarch of the family she created the stability and compassion to enable the family to build an incredible business that includes Pharmacy Business. Her intuition provided guidance at times of need and she gave steel and determination when it was needed.

“She will be sorely missed but her legacy will live on through the children and grand children.

Associate director at Pharmacy Complete, Mike Holden, said: Whilst I only met Parvatiben Solanki on a few occasions alongside her husband and the rest of the Solanki family, this is another sad loss to our society and the Solanki family.

“Like in most families, there is always wonderful support and leadership that comes from the matriarch, I know she will be deeply missed.”

We are indebted to her: Sadiq Khan

In a condolence message, the London mayor, Sadiq Khan, said: “Having come to the UK in the 1960s, Parvatiben and Ramniklal worked as equal partners, building Garavi Gujarat and later the Asian Media Group. In these endeavours, Parvatiben was not only a driving force but a true visionary too.

“It is with nothing but admiration that I will remember Parvatiben’s pioneering role in uniting and integrating London’s diverse communities. We are indebted to her for keeping the Gujarati language alive in the UK through Garavi Gujarat, and her role in pioneering the Asian Media Group, Britain’s biggest Asian publishing house.”

In his tribute, the spiritual Purushottam Swaminarayan Sanstha (BAPS), His Holiness Pujya Shri Mahantswami, said, “Parvatiben has found her divine place at the feet of Shriji Maharaj after her journey to the heavenly abode.”

Parvatiben was one of eight children born to Makanji Dulabh Champaneri (Chavda) in 1936 in Pethan in Gujarat. She attended school there and in 1955, wed Ramniklal Solanki. The couple had four children –Kalpesh, Sadhana, Smita and Shailesh. They moved to London in the late 1960s and settled in Wembley, from where Mr Solanki began Garavi Gujarat as a fortnightly for the community in the UK.

In the early days, the couple was involved in all aspects of running the publishing business – from gathering news and writing, to printing, circulation and subscription.

Mr Solanki was the public face and editor-in-chief of AMG, while Mrs Solanki played a key role in the administrative side of the business. Garavi Gujarat soon became popular and grew. The couple moved the business to an office in central London before eventually setting it up in Southwark, south London.

Mrs Solanki led other family members in playing a hands-on role in setting up and expanding the business.

She supported Mr Solanki as he rose to become one of the foremost Asian journalists in the UK, with his insightful and fearless journalism. In recognition of Mr Solanki’s contribution to the field of journalism, the Queen honoured him with an OBE in 1997, followed by a CBE in 2007.

Lord Jitesh Gadhia paid tribute to Mrs Solanki, saying: “With its humble roots in a terraced house in Wembley, the growth of the Asian Media Group and its flagship publications Garavi Gujarat and Eastern Eye over the past five decades mirrors the journey of the wider Asian community over the same period.

“Side by side with her husband Ramniklalbhai, they were among the first ‘power couples’ of the British Asian community. “Working in genuine partnership and complementing each other, Parvatiben and Ramniklalbhai were true pioneers in their own individual right, leaving a huge legacy which is being taken forward by their sons Kalpesh and Shailesh and now involving the third generation.

“It was very sad and poignant to receive the news that Parvatiben Solanki passed away on the same day as the Queen. This uncanny coincidence will have amplified the shock for the Solanki family. Losing the head of their family on the same day as our nation lost its beloved monarch is a double blow – both matriarchs will leave a huge void. I hope the inspiration and blessings of Parvatiben and Ramniklalbhai continues to guide the Solanki family and motivates them to continue building on their parents’ powerful legacy.”

Barry Gardiner, the Labour MP for Brent North, is a close friend of the Solanki family. He said: “Over the quarter century that I have known Parvatiben, three things always stood out: the deep love she shared with her husband Ram, her air of calm decisiveness– and woe betide anyone who confused her gentle nature for weakness, she had a steely determination that should never be underestimated –and the extraordinary reverence in which she was held by her children and grandchildren.

“Occasionally, I had the privilege of sitting next to her at a dinner, and across the years, I learned that two topics of conversation were always welcome – stories about her grandchildren and how to get a little sweet white wine, always in moderation, of course!

“The story of the business empire that is the Asian Media Group is an extraordinary one, but it is one that would not exist without the constant drive and inspiration of this remarkable lady.”

As well as being involved with the business, Mrs Solanki raised their family as it grew and was the guiding force for their sons, Kalpesh and Shailesh, who took over from Mr Solanki when he passed away in March 2020. Although she stayed at home in the latter years, Mrs Solanki remained a key decision maker in the business, and was held in high regard by AMG staff as well as the wider Asian community.

She attended AMG awards dinners with Mr Solanki and was a gracious hostess to chief guests, including Bollywood superstar Amitabh Bachchan; former prime minister David Cameron; and ex-chancellor George Osborne, as well as several secretaries of state, captains of industry and business leaders.

She was equally at ease with influential public figures as she was with younger members of staff, providing quiet words of encouragement. At their family home in north London, Mr and Mrs Solanki hosted prominent personalities from the UK as well as guests from India – they included spiritual and community leaders and literary figures.

Mrs Solanki was fond of gardening and would visit horticulture exhibitions; and she has passed on her love of plants to her grandchildren. She stayed active by going for walks and enjoying the company of her great grandchild. Mrs Solanki is survived by her sons Kalpesh and Shailesh, daughter Sadhana, daughters-in-law Rashmita and Sheila, 11 grandchildren and a great-granddaughter.

A memorial service was held at the Swaminarayan temple in Stanmore, north London, on Thursday (September 15).

Her funeral will be held at Golders Green on Saturday (September 17).