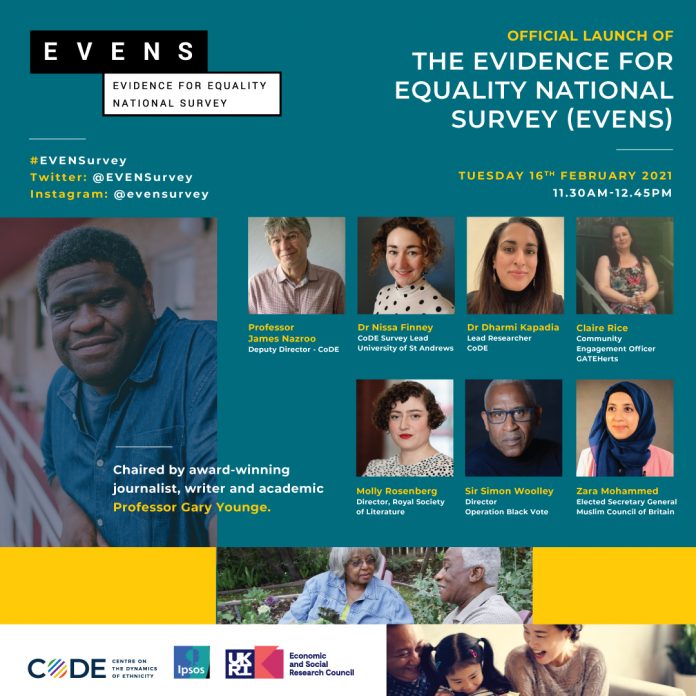 A new survey has been launched to examine the lives of 17,000 ethnic and religious minority people to highlight the issues they have faced during the coronavirus pandemic.

The Evidence for Equality National Survey (Evens), which will run for three months until May 2021, will ask participants about employment, finance, education, economic wellbeing, health, housing, policing, identity and experiences of discrimination and racism.

Dr Nissa Finney, Eevns’ lead and reader in Human Geography at the University of St Andrews, said: “Disadvantages of ethnic and religious minority people have been highlighted and exacerbated by the period of austerity, followed by the Covid-19 pandemic, meaning there is an urgent need to act to mitigate growing inequalities. Evens will give us a unique and authentic representation of the lives of ethnic and religious minority people in Britain during the current crisis.”

Professor James Nazroo, deputy director of CoDE and Evens’ co-lead, said: “This ground-breaking survey will help shift the narrative on ethnic and religious inequalities in modern Britain. There is an urgency as practitioners and policymakers are crying out for robust and comprehensive scientific evidence that they can use to understand and address the inequalities faced by ethnic and religious minority people. Evens will provide that evidence.”

Zara Mohammed, the new secretary general of MCB, said that EVENS will benefit society as a whole because it will be a snapshot of people’s experiences and point out where something needs to be done.

“It also aims to reach out to Muslim respondents to a far greater degree and with a wider range of questions affecting their daily lives than other social surveys. EVENS will provide comprehensive, evidence-based and up to date information to better highlight and address inequalities and forms of discrimination,” she added.