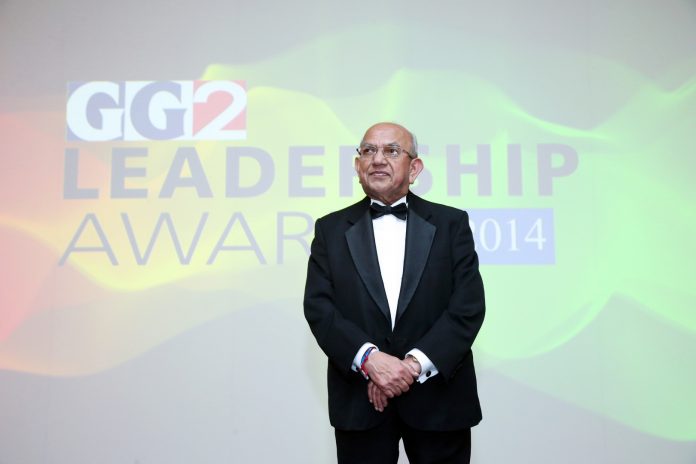 London Mayor Sadiq Khan has led tributes to Ramniklal Solanki, a giant of Gujarati journalism and pioneer of British Asian media, who passed away last weekend. He was 88.

Mr Solanki was in Ahmedabad, Gujarat, when he suffered a stroke last week. He was admitted to hospital and passed away peacefully surrounded by his family on Sunday, March 1.

Mr Solanki was the founder and editor-in-chief of Pharmacy Business magazine and Asian Media Group (AMG), which is today Britain’s biggest and most successful Asian media businesses. Among the group’s other market leading consumer and business titles are Garavi Gujarat newsweekly, Eastern Eye newspaper, Asian Trader and Asian Hospitality.

Paying tribute, Khan said the contribution of people like “Uncle Ramniklal to the British Asian experience cannot be overstated.”

“When I was growing up, there were publications who would often misrepresent or even erase the voices of people of colour,” Khan said.

“Many of my parents’ generation endured real hardship while carving out their place in our society but the connection and comfort community-led publications offered helped make that journey that little bit easier.”

Patel added: “He would encourage my determination and work ethic and has said to me on many occasions: ‘If I have to work all hours, I’m happy.’”

Labour MP Barry Gardiner recalled the first time he met “gracious spirit” Mr Solanki following his election as the Brent North MP in 1997. Meeting at the AMG offices in south London, Mr Solanki shared his lunch with Gardiner and the two became acquainted with one another. “He wanted to get to know me and I realised what a privilege it would be to get to know him,” Gardiner reminisced. “And so, it has proved.”

Gardiner claimed Mr Solanki’s family were his “heart and motive”.

“They are what he is most proud of,” Gardiner said. “They are his inspiration and his joy. And they have returned his love in equal measure to the third generation.”

Sajid Javid, former Chancellor of the Exchequer, said: “I am deeply saddened to hear that Ramniklal has passed away. His passionate advocacy for his community and contribution to modern Britain is only eclipsed by the personal qualities that made him so beloved.

“His unfailing grace and humour; the dedication to hard work – and the love and care for his family and friends.

“My thoughts are with the Solanki family as we remember and celebrate the life and legacy of Ramniklal Solanki CBE.”

Meanwhile, leaders from the pharmacy sector sent their tributes, calling Mr Solanki and “true legend” and a “pioneering journalist.”

Sigma Pharmaceuticals CEO Dr Bharat Shah CBE: It’s been my honour to have met and known Ramnikbhai for the past several years. He’s been instrumental in not only promoting but also encouraging integration of different Asian communities within the wider UK businesses, well-known personalities and national political arenas.

Ramnikbhai started his legendary Garavi Gujarat publication in the late 60s, which even today is a household name in our Asian communities.

My interaction with Ramnikbhai and his family has been more frequent following the launch of Pharmacy Business magazine.

Ramnikbhai has earned a special place in the UK community pharmacy sector and the UK pharmaceutical industry sector as a whole.

I fondly remember his graceful presence at all events hosted by the Asian Media Group. I have seen him actively engage with so many people, from all walks of life – business, industry, arts, sports and politics. I will always remember him for so humbly reciting from his heart his Hindu religious grace (verses from the Holy Bhagavad Gita) before dinner at every AMG awards ceremony.

He was a such legend in our Asian communities that he will be remembered forever. We can all be immensely proud of the legacy he has built. Om Shanti!

North East London LPC Secretary Hemant Patel: I’m sad to hear of the sad demise of the founder of the Garavi Gujarat and associated publications, including Pharmacy Business. Leadership is a rare quality and can get difficult to sustain over a period of time. Ramniklal Solanki achieved astute leadership in a congested and competitive market; he leaves a legacy for the family and a voice for his readers. May his soul rest in peace!

Day Lewis Executive Director Rupa Patel: Our love and prayers go to all the Solanki family. Ramniklal Solanki CBE was a pioneer in every way – both within his business and through charitable giving. He was, by far, the most generous and forward-thinking man of his generation.

We are touched to have known him and he will be missed by everyone. We are certain his legacy will live on through his children and grand-children who are a credit to this great man. Gone, but never forgotten!

Association of Independent Multiple Pharmacies CEO Leyla Hannbeck: I had the good fortune to meet the legend and pioneer of Gujarati journalism, Ramniklal Solanki, on several occasions. A humble and principled man who in many ways was ahead of his time. A stoic campaigner for civil liberties, an entrepreneur and a journalist who was never afraid to reveal the truth. A friend of pharmacy who, together with his family, championed this profession by promoting it at every opportunity.

But perhaps the most fitting tribute I can give is of a man who created his own place in society and won the hearts of the British Asian community.

His gentle disposition and modesty, I will remember forever.

National Pharmacy Association CEO Mark Lyonette: I know I speak on behalf of my NPA colleagues when I say how much we admire Ramniklal Solanki and his family for building up the Asian Media Group from humble beginnings into a large and important communications business.

It is a truly remarkable story of dedication and entrepreneurial endeavour. AMG’s publications cater both for NPA members and many of the customers they serve, and we wish the group continued success now that their founder sadly has passed away. Although he met Prime Ministers and was given high honours, I am aware that he also maintained friendly relations with the people who worked for him on the shop floor, which says something about the character of this pioneering journalist and businessman.

Pharmacy Complete Principal Associate Mike Holden: The world has lost a great man and will be sad at his loss but should celebrate all he gave us.

Former NPA Chair Ian Strachan: He will be sadly missed by all who had the privilege and honour to meet him. He represented the finest virtues of a man and father to be proud of. The families respect and love for him was evident by all to see. I will always remember him with fondness and honour.