Home Coronavirus Coronavirus will change attitudes to pharmacy use and self care, PAGB survey... 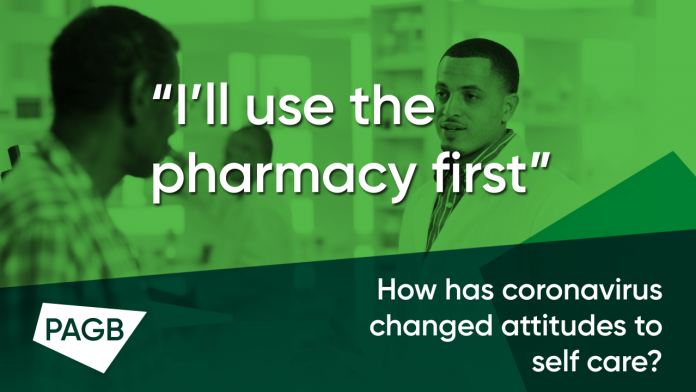 Almost one in three people who would not have chosen a pharmacy as their first port of call for advice about a self-treatable condition say they are more likely to do so following the coronavirus pandemic, according to a new survey.

The poll, commissioned by PAGB – the consumer healthcare association – found that more people will consider caring for themselves in future while A&E and GP services are less likely to be the preferred option.

The findings suggest the sharp fall in numbers attending A&E departments and GP surgeries during lockdown could pave the way for a longer-term shift towards self-care and a more central role for pharmacy teams, if people feel properly supported and informed about their options.

More than 2,000 adults took part in the survey, which comes in the run-up to the International Self Care Day on 24 July.

All had experienced at least one health problem that is normally self-treatable – such as backache, hayfever or a sore throat – since lockdown began in the UK on 23 March.

Almost seven out of ten respondents (69 per cent) who might not have considered self-care as their first option before the pandemic said they were more likely to likely to do so in future.

In addition, almost one in three people (31 per cent) who would not have asked a pharmacist for advice about their symptoms as a first option said they were more likely to do so following the coronavirus pandemic.

Among those who previously considered A&E as an acceptable route to access care for generally self-treatable conditions, more than seven out of ten (71 per cent) said it was less likely to be their first option after the pandemic.

Among those who previously sought a GP appointment as their first option, more than half (51 per cent) said they were less likely to do so after the pandemic.

Around 77 per cent of the respondents agreed the pandemic should change the way we think about using GP appointments and A&E services, while 86 per cent agreed that A&E and GP appointments should be used only when absolutely essential – up from 81 per cent in PAGB’s 2016 survey of attitudes to self care.

Almost one in three people (32 per cent) said the pandemic had changed their attitude to the way they access healthcare services.

Before the coronavirus outbreak, there were an estimated 18 million GP appointments and 3.7 million A&E visits every year for conditions which people could have treated themselves or for which a pharmacist should have been the first port of call.

The cost to the NHS, along with that of prescriptions for products which could be bought over the counter, is estimated by PAGB at £1.5 billion a year.

Deborah Evans, a pharmacist in Winchester and Fellow of the Royal Pharmaceutical Society, said:  “Pharmacies have played a central role in helping people to care for themselves during the Coronavirus pandemic.

“We have remained open throughout as the front door to the NHS, supporting people in person or over the phone.

“PAGB’s survey results suggest there is real scope to build on changes in the way people have accessed healthcare services in the last three months, making more effective use of the expertise of pharmacists and their teams.

“Reliable advice is easily available to those who are now more willing to self care.

“Pharmacists are trained to ask the right questions and to recognise when someone should see a GP or access emergency care. We will make it clear when we believe more help is needed.

“The health conditions experienced by those who took part in PAGB’s survey can, in many cases, be treated effectively and appropriately with input from a pharmacist and with an over-the-counter product, leaving GP surgeries and A&E departments with more capacity to look after people who have serious or urgent medical problems.”

Michelle Riddalls, PAGB Chief Executive, said: “Our survey results suggest there may never be a better time for policymakers to prioritise and encourage self care.

“That means recognising and enhancing the role of pharmacy teams, who have too often been overlooked in the drive to improve both our health and our health services.

“We have long argued for a national campaign to raise the profile of pharmacies as the first expert port of call for self-treatable conditions, as well as pressing for policies which would allow pharmacists appropriate access to patient records and to refer people on to other healthcare professionals when necessary.

“These steps would undoubtedly encourage the self care which our survey shows so many are keen to embrace, and in turn would improve the long-term sustainability of the NHS.”

The survey of 2035 adults was carried out by PureProfile on behalf of PAGB between June 22 and July 1.