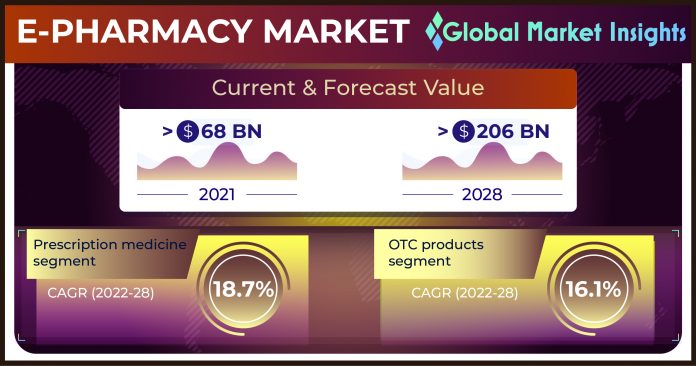 E-pharmacy, a digital platform also known as internet pharmacy or online pharmacy, has emerged as an escape route to longstanding queues at pharmacy stores across almost all regions of the world, especially during the Covid-19 health crisis realm.

They have long been recognized to act promptly in public health response, like ensuring an effective medicine supply system, resolving and monitoring drug shortage issues, educating about the proper use of PPE, promoting remote pharmacy services, and conducting drug evaluation and active surveillance.

These factors will support in easing the load on healthcare facilities during the ongoing pandemic, eventually adding value to patients and the healthcare system.

Overall, the e-pharmacy market size is expanding in terms of valuation on the back of regulations and standards laid by the respective governments.

As per a recent study by Global Market Insights, the global e-pharmacy industry accounted for a business share of $68 billion in 2021 with an anticipated growth rate of 16.8 per cent through 2028.

Enlisted are some of the prominent countries/regions where e-pharmacies are gaining significant attention compared to conventional bricks-and-mortar pharmacy stores:

Europe, inclusive of the United Kingdom and Germany, is slated to cement its position as one of the hotspots for e-pharmacy industry with the growing population inclined towards online mode of medicine purchase.

With the demand for online medications and doorstep delivery of these continuing to expand profusely, different healthcare and beauty retailers are striving to enter the online pharmacy business with strategic moves like acquisitions and mergers.

For instance, a German-based beauty retailer Douglas announced a breakthrough in online pharmacy through the acquisition of Disapo — an e-pharmacy.

Reports suggest that the German retailer would integrate Disapo into its own digital platform, offering its customers proper access to the online pharmacy, initially in Germany.

The burden of health diseases like common flu, cough, back pain, and others is substantially increasing in the United States and Canada.

This has led to an intrinsic demand for related over-the-counter products with access and dependence on e-pharmacy gradually rising.

Moreover, increasing internet penetration and growing number of e-commerce sites dealing with prescription drugs would support the expansion of e-pharmacy market in the region.

According to the National Association of Boards of Pharmacy estimates, there are nearly 400 websites dispensing prescriptions in the United States.

To support the surging demand for drugs through online portals, different companies are working relentlessly to foray into the new healthcare trend.

One of these companies is Amazon.

The tech giant, in 2020, marked a debut in the healthcare sector with the launch of its own online pharmacy service in the States. The online pharmacy would enable consumers to manage prescriptions, with Prime members to receive two-day deliveries on orders for medications.

It would be imperative to note that e-pharmacies are gradually taking up a major stake in the overall pharma retail value chain in various emerging APAC countries.

Having said that, the regional e-pharmacy market captured a revenue share of 17 per cent in the overall industry in the yesteryear, with China and India being the prominent geographies supporting the market expansion.

The growth of e-pharmacy industry in India can be credited to the growing internet penetration, changing customer preferences, and introduction of government initiatives that help augment the pharmaceutical industry canvas nationwide.

Constant innovations by leading market players to grab a prominent position in the region would well augment the growth curve in the coming years.

In 2021, Mumbai-based PharmEasy announced the acquisition of Medlife for an undisclosed amount to solidify its position as an e-pharmacy leader in the country.