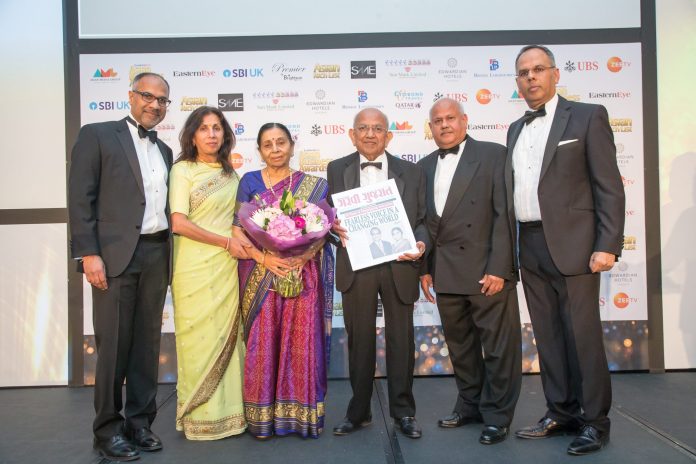 When he took to the stage at the Asian Business Awards in March 2018, it was the first and only time that Ramniklal Solanki was the recipient of an accolade at an AMG event – usually it would be him who had the honour of presenting awards to winners at the annual events hosted by the the company he founded.

Accompanied by his wife and companion of 64 years, Parvatiben, Mr Solanki was presented a memento by his sons Kalpesh and Shailesh to mark 50 years since the couple launched Garavi Gujarat from their home in north London, on April 1, 1968.

Guests at the gala event – among them powerful politicians, business and community leaders – gave the couple a long, standing ovation.

It was a celebration of the couple and their family’s enduring efforts in ethnic journalism in Britain.

Over five decades, Garavi Gujarat expanded from an A4 size cyclostyled publication to a full colour newsweekly with editions in the UK and US.

Other news titles followed – Asian Trader, Pharmacy Business and Eastern Eye, as well as Asian Hospitality and Priya magazine in the US.

The company he founded, Asian Media Group, is one of Britain’s largest Asian publishing houses, and also hosts up to six annual events – each regarded as being among the best in their sector in the country.

Chief guests have included a prime minister and several secretaries of state, while influential politicians and business leaders have been guests of honour.

At last year’s GG2 Leadership Awards, then chancellor Sajid Javid announced that the Royal Mint would produce a special commemorative coin in honour of Mahatma Gandhi.

But it was not the awards ceremonies or the high-profile chief guests that AMG is known for.

That honour belongs to Garavi Gujarat, launched as a fortnightly, before its popularity quickly turned it into a weekly.

It was envisioned as a voice for the Gujarati community in the UK, providing readers news from Britain and India as the newly arrived immigrants settled in a foreign country. In the early years there were detailed reports about how Ugandan Asians faced challenges as they lived in refugee camps up and down Britain, after they were deported by Idi Amin.

Mr Solanki interviewed displaced families as they tried to rebuild their lives, often working two jobs in order to make ends meet. Years later, many of those immigrants would end up being wealth and job creators in the UK.

The 1970s and 1980s also saw the arrival of immigrants from India, and many needed help understanding the rules and laws of a new country. Garavi Gujarat helped its readers navigate those difficult years, at a time of open hostilities against ethnic minorities.

After the BCCI banking crisis of 1991, Garavi Gujarat ran a series of articles asking for calm after the collapse of four Asian banks at the time.

Under Mr Solanki’s leadership, Garavi Gujarat’s stories, which included an exclusive interview with the Governor of the Bank of England, Eddie George, are widely believed to have saved the only surviving Asian owned bank – Meghraj Bank.

In keeping with its philosophy of promoting harmony and better relations between Britain’s various communities, Mr Solanki and Garavi Gujarat hosted a reception at a West End Hotel for Eddie George to meet members of the Asian business community. Many Asians had alleged racism in the banks dealings with the collapsed Asian banks.

A dedicated journalist who was quiet by nature and known for his sharp wit, Mr Solanki stood tall in his community. His foremost commitment was to his readers; Garavi Gujarat, both in its UK and US print editions as well as its online versions, covers everything from politics to business, race and immigration, sports and entertainment as well as community news and reviews.

During the inauguration of Garavi Gujarat House in Southwark, south London, BK Nehru, a cousin of India’s first prime minister, Jawaharlal Nehru, and the then High Commissioner for India, was among the guests of honour.

Since its launch in 1968, Garavi Gujarat became the largest circulated Asian magazine in Britain and gained a substantial number of readers around the world.

With the addition of an English section for second generation Asians, it became a paper for the whole family. Today the paper and its online edition have a growing international reach.

One of Garavi Gujarat‘s most popular publications is its annual Diwali edition, a collector’s edition with features, photo essays, thought-proving articles and exclusive interviews with politicians, business leaders and leading stars from the world of entertainment.

With the launch of the GG2 Leadership Awards, the newsweekly provided a platform to showcase the achievements of minorities in the UK – and this is not restricted to the Gujarati community.

More recently, AMG launched the GG2 Diversity Conference, with guest speakers discussing the challenges around equal opportunities for all.

Garavi Gujarat‘s enduring popularity and wide reach has helped the publication raise funds for good causes, such as in 1979, for those affected by the Morbi floods in Gujarat and the Bhuj earthquake of 2001.

Garavi Gujarat‘s sister titles include Eastern Eye (acquired in January 2009) as well as Asian Trader and Pharmacy Business. Each of these publications is known for its high standard of writing, with many of AMG’s senior journalists having worked under Mr Solanki and learned their craft from him.

Until the end of last year, it was not unusual for Mr Solanki to sit in his office, following the news and encouraging the younger generation to serve the interests of AMG’s wide readership.

Today, AMG has newsrooms in London; Atlanta, Georgia; and Ahmedabad and Kochi in India, all dedicated to keeping alive the legacy of Mr Solanki and his outstanding achievements.